While it was cold and rainy outside I decided not to go out on a photo safari but stay in my warm studio. Whilst sitting around and browsing the web I got some inspiration for a low key photo.

In the description below I explain the details and why I took the image as I took it. 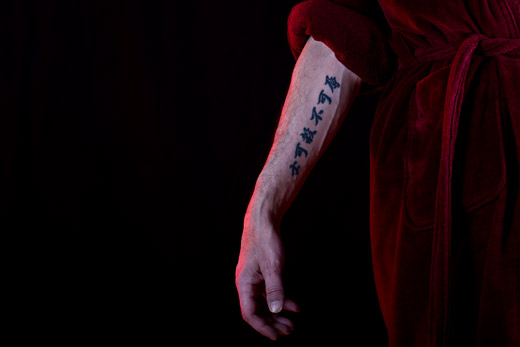 The studio setup was as followed:

I used a black backdrop what is very obvious at first glance of course.

I placed a strobe with softbox to the right in front at a 45 degree angle. De distance of every strobe was by the way a little less than one meter. To the left I had a same strobe with softbox lined up with my body. In a way that only the front of my body would be lit by it.

The two strobes where set to 3/4 power approximately. The red one to 1/2.

To match the light color on my arm I thought it would be clever to put a strobe with a red gel to the right (without softbox) and line it up with my body but point it slightly diagonal on my arm. This way I could keep the whole thing quite redish (including the black background) and at the same time achieve a a slightly colder lighting at the part of the arm where the tattoo is located.

This was pretty much it.