Shot through a dirty window the image I took from this wolf was totally lost. The green of the bushes behind him were mirroring on the other side of the glass and reflected a green shine back on the wolf.

Not to mention that the image wasn’t entirely sharp due to some movement.

And then I don’t even talk about the framing that is quite bad as putting the wolf to one side of the image brings the whole thing in unbalance.

Normally I wouldn’t even consider keeping a photo like that and would delete it right on the spot. But there was something that kept me away from doing it, 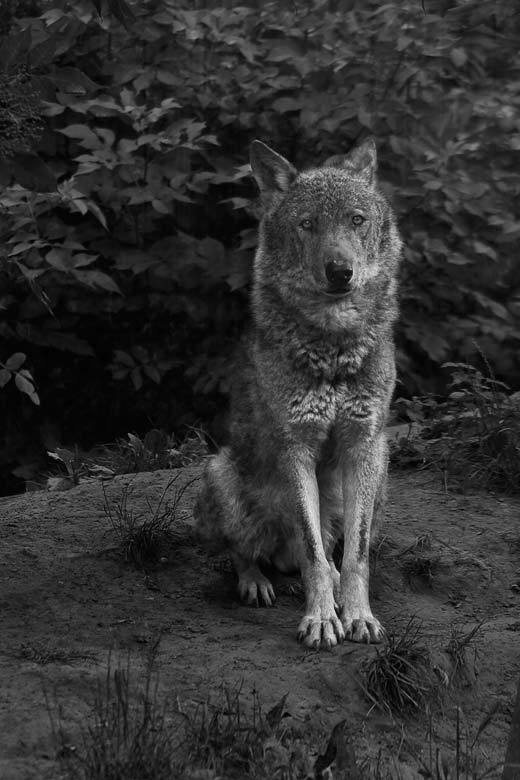 even though I could (and will) make a new photograph of this pretty rocker in the next days or weeks.

The image was shot in RAW and this is one of the reason that it could be rescued. Before I tell you what I did to the image I  give you the meta data:

After I opened the image in Camera RAW, turned it into black and white and then played around with the contrast, local contrast and sharpness I did a little Photoshop magic to it as follows (as far as I remember):

First I made a copy of the layer and made it a lot lighter. I did this because I wanted the wolf to pop out. Of course if you do it this way both the wolf and the back- and foreground will become lighter. So I used a layer mask and hid everything but the wolf under this mask.

As it was way brighter than the End result should be I lowered the opacity of the layer to make it less obvious and unrealistic. Once I was satisfied with the result I merged the layers.

Then I copied the layer again and did the same procedure with the eyes as in the original photo they didn’t come out that well.

What you see is the end result. You can click on it for a larger version. To keep the load speed equal for everybody I saved this versions here in lower size file formats. In fact it’s just 40% of the quality here. On the other hand this is quite a good example how good Photoshop processes your images.