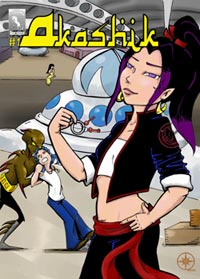 Spaceships and Angels make very interesting ingredients for the webcomic I want to show you today.

This four woman harness their creativity together as The Writers Of The Apocalypse.

Let’s have a closer look at Akashik: Battle Of Angels in the following video:

Death (Katrina) is the leader of The Writers Of The Apocalypse and according to her it’s a sloppy comic with a bad start as openings are her weak point.

With all respect to her self criticism at this point I have to disagree with Katrina right from the start. The reason is that I know how hard it can be to draw the images accompanying a normal conversation. When we look at the first page we see that the story boarding is very well done. By giving us first an image of the scenery and then zooming in on the characters she draws us right into the conversation of Taus and Herman, that already was going on before we arrived at the scene. Just like in a movie.

Further the characters are given character. I know this sounds funny, but very soon we learn that Taus for example enjoys a bottle (or more) of a good wine during here journey in this webcomic.

A little side note here: Katrina recently presented a very nice figurine of Taus in one of her video’s. And you guess it right the bottle of wine isn’t missing. You can watch this video and see the amazing figurine of Taus by clicking here.

Manga’s often tent to have a huge narrative arc. Akashik: Battle of Angels is surly not an exception at this. I’m tempted to call it a graphic novel due to this fact.

What is very nicely done are the transitions between the scenes where the characters are introduced. For example: while Taus is hijacking Herman’s spaceship we meet Sub-Startcraftman Fey who is introducing himself via a food fight.

Katrina told me that they had to work very fast on this weekly updated webcomic and for this reason she hadn’t enough time to draw prettier. As you probably know from your own experience is that there is always that one person who is never satisfied with the artwork and that is the artist him- or herself.

When you go further through the story you see that this comic book characters
are very good acting with their facial expressions and body language.

The more time the artists invest into the project the more they unleash their creativity with paneling and bringing the artwork to the next higher level. I really love to see it that The Writers Of The Apocalypse are driven by their
passion.

My conclusion on this webcomic is that with the character of Taus they created
a woman that really can bring you into trouble if it’s your girlfriend and the question is not if but when she will steal your spaceship. So be aware.

Coming back to Katrina’s statement that the artwork is kind of sloppy. You know that I disagree with that. I would rather tent to suggest tweaking the webdesign with for example a combination of WordPress and ComicPress.

But however, my focus lays on the comic here and not the webdesign. Otherwise this would be pretty much the same like saying that the quality of a TV-show depends on the color of the buttons on your remote-control. Akashik really deserves your eyeballs, so I recommend head over to Akashik: Battle of Angels and have fun.