It’s Wednesday and as (almost) always I will have a drink over at my friend René’s place later today.

The reason I bring this up is that most of the time when I’m busy drawing something (in fact it doesn’t matter what I’m doing) thoughts come up in my mind and often these thoughts are the results of conversations I had during our Wednesday ‘booze’ evenings. My post on Amercian Gangsters for example was the result of such a night.

Before I go ahead have a look the drawing I made during my thinking process. It’s a Peter Pan with boobs. (Yes, very mature but actually I see Peter Pan rather kind of androgynous). And as thinking rhymes on inking I made a real time screen recording in HD of the inking process. You find the video at the bottom. It’s nearly 30 minutes and whilst working I’m talking a little about the conversation I had with my mates. Honestly I’m not very satisfied with the final result but decided to post it here anyway. 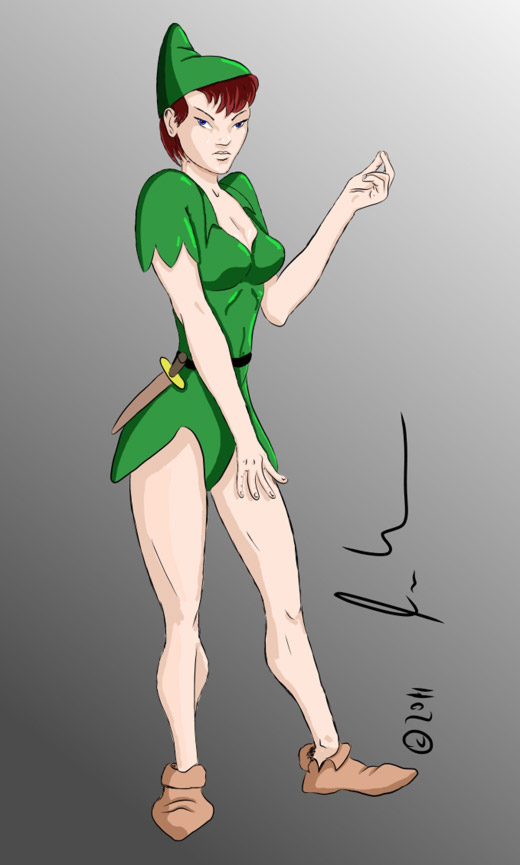 A couple of weeks ago René brought up the idea that every member of our club has the Peter Pan Syndrome in some way and he didn’t made a difference here between male and female.

In his opinion (and we all agreed with him on that) none of us is acting mature as the adults at our age range (35 to 44 at the time of writing). This made me kind of curious and I dived a little deeper into it.

Dan Kiley published in 1983 the book The Peter Pan Syndrome: Men Who Have Never Grown Up. Here are some of the points describing the syndrome (what nowadays is also often called the Michael Jackson Syndrome):

According to Dan Kiley all this is the result of a deep wish to be mothered. Though I can find me in some way in this I don’t really thing that this is something just men have to cope with. Doesn’t have every human being the urge to be mothered. In situations where life is just to heavy to bear anymore. When everything seems to fall into pieces? I think so. Think about it for a minute and you realize (again) how important mothers are in this world.

Even though most of the things listed above aren’t true for my mates and me I still think that we are very child like. I don’t know if it’s the Peter Pan Syndrome of any other one. If you think this article was going nowhere you’re probably right. If this is the case you still have the drawing above and the video below.

While I’m inking here I tried to follow a tip by Dave Gibbons: don’t be to neat with the line work. And I really wasn’t neat with it.