I want to celebrate the 400th post on Mario Live! a little. So here comes the celebrating part: tataaaaa!

In his comment on this article Piledriver mentioned the good old pause button of the VCR.  He liked to hit that button and then make a drawing of the frozen actor or actress. I used to do that just in the same way and it always was a challenge for me to get the first sketch done before the five minutes were over and the VCR would turn the still picture off to save the tape.

Most of the drawings I made are given away, sold or lost in any other way. There is just one that hangs in the hallway of my house. Mainly because I wasn’t able to sell it on eBay back in the days.

It is a chalk drawing of Charles Bronson from the movie ‘Once Upon A Time In The West’. I made it in Aril 1997 and after I hit the pause button of the VCR I first made a sketch with pencil. After that I started the chalk work and it took me several hours to finish.

Because Piledriver was curious about the result I post a photograph of it right here: 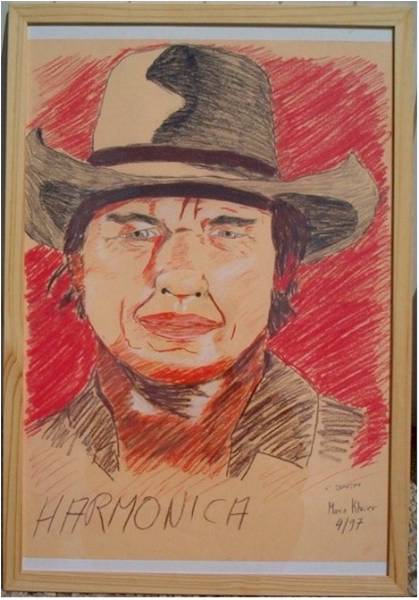 Because of his characteristic facial features Charles Bronson was quite easy to draw.