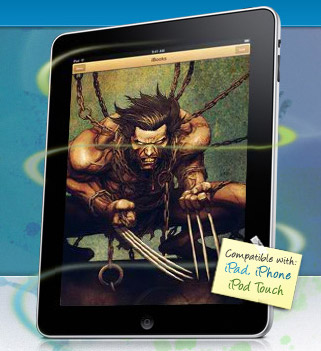 My friend Bart is a gadget lover and as many other people he was waiting nail biting on the release of Apple’s IPad once it was announced in the media.

I have to admit that, even though I live on-line and I love technology, I still see the IPad as kind of a roof tile sized cell phone. Talking about cell phones, can you imagine that I’m at the time of writing this still use an old Nokia cell phone?

Yes, one that has just the purpose of calling and getting called. It can’t make coffee or do the dish washing. 50% of the time it acts as an alarm clock as it has this friendly voice that tells me that it’s time to get my butt out of bed.

One week ago Bart came along with his IPad and said that he now had something that even I would love on it. When he was talking about books on the IPad I immediately replied: When it comes to books in a digital format I would rather read them on a Kindle.
I read on the Kindle when I was at my sisters place in New York two month ago and I love it. It really has the right feel for reading books. I think it’s mainly the reflection of the screen that let’s me prefer the Kindle above the IPad.

But I drift of. As you noticed I wasn’t very polite not to let Bart finished. What he showed me somewhat amazed me. He started flipping through the pages of some comic books in crisp quality on his screen. The pro in comparison with the Kindle here was that it all  was in full color. Of course, duh.

When he told me that he had signed up to a side for downloading it my first thought was This guy has become nuts. He will pay his butt off for a monthly fee or something like that.

This time I decided not to interrupt Bart and just let him finish. First he explained that this service didn’t just provides comic books and graphic novels but also free novels and newspapers. The best thing was that he doesn’t have to pay a monthly download fee. (This canceled out my thought that he had gone crazy).

Thousands of available titles and technical support around the clock made the one-time payment of $ 49,- a no-brainer for him. I guess Bart is right. This pricing is indeed in the range of impulsive buying decisions and in the end you get more than what you pay for.

And as Bart has all the Apple ‘toys’, he is very pleased with the fact that this service is compatible with his IPhone and IPod Touch as well. If you are a Apple and a comic book lover you may want to check out the website of MyPadMedia.