As I said in my former post I want to explain how the drawing was done in Manga Studio. Please forgive me that this isn’t a line by line tutorial. I think however that the screenshots may help you understand the way I worked on this image. 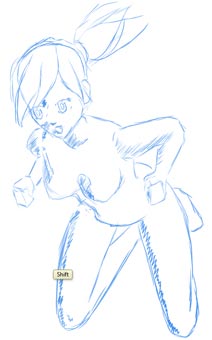 In the picture above you see that I did a first rough sketch in blue on my first sketch layer. In fact this is the second stage as I first made a kind of a skeleton to position the features of the girl. Of course you can use a 3D joint doll if you use Manga Studio EX. To nurture my skills I didn’t use one this time. I also marked the shadow areas already. 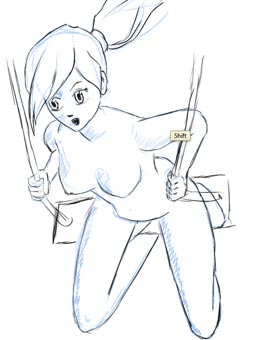 I think it’s because I was a little impressed by the webinar hosted by Dave Gibbons last week. This is probably why I decided to create a second sketch layer and used a black pencil to bring the drawing to the next, more detailed level. 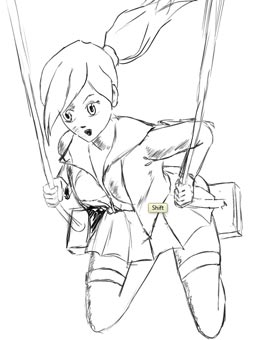 Still on the second sketch layer (I turned off the first one in the meantime) I started to give the girl some clothes. As you know naked isn’t sexy. Clothes that leave something to your imagination are making the girl sexy. Sexiness of course lays in the eyes of the beholder, so chances are that you don’t find her sexy at all. I do. At least a little.
While drawing the clothes I erased most of the lines that became useless. 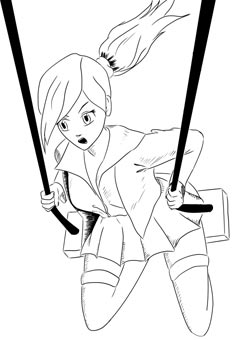 After a short coffee break I started the inking work. I tried to keep Dave Gibbons tip in mind that it isn’t necessary to draw the lines to neat. Not every single line you ink has to be closed.
After inking for a while I decided that it looked pretty much done. I wanted to prevent overdoing it and sometimes less is more. What do you think? 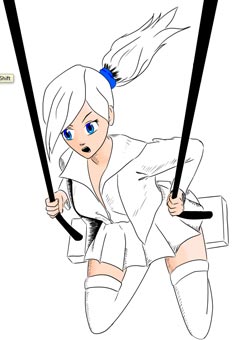 Before I went to the coloring steps I made selection areas as I described in my tutorials on this page. I don’t know why but I love to color the skin first. Now I’m writing this and comparing the uncolored version with the colored one above I find that there is a little more panic in the face before the coloring. What did I do wrong? I guess I should have chosen for a different style of eyes. You see? We always learning by doing. 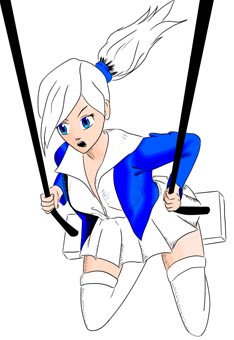 The next coloring step was the jacket. I also used the burn tool to add some extra shadows. 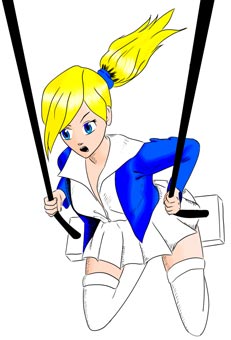 Because I wasn’t sure at that moment if I would give the rock of the girl the same color as the jacket I decided to color and highlight the hair. This gave me some extra time to think about it without getting a delay in finishing the image. If you like to see in more detail how I tend to color and highlight hair, you want to take a look at this video tutorial. 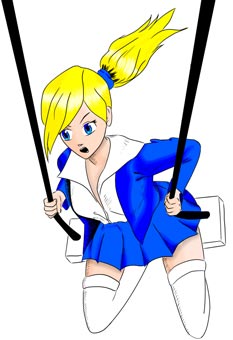 As you already knew, I decided to give the rock the same color as the jacket. This step was a very short one. 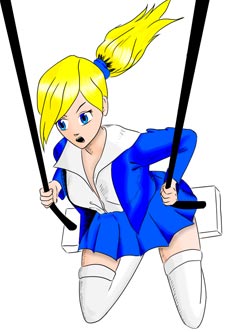 After all the blue fabric was done I added shadows to the socks(?) and the shirt. For all the shadowing work I used the color blender tool by the way. In addition here and there the burn tool. Here as well, I tried not to overdo things. 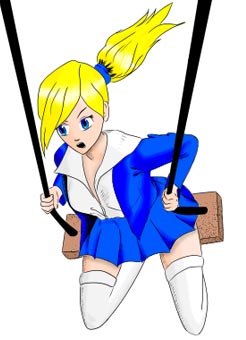 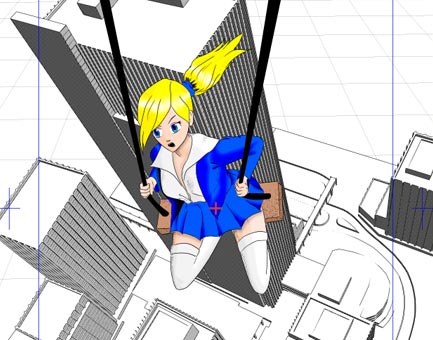 This is the part where you maybe get mad at me because this is the only in-between-screen-shot I made. I used a 3D object for the buildings and brought them into  the proper position. Then I inked and colored the whole thing, what was a bunch of work. Believe it or not, it took more time to draw this skyscraper scenario than it took to draw the girl.

You can see the final picture here.

I hope you found this little walk through helpful and I look forward to have you back on my blog very soon.

Have a nice day!

2 thoughts on “The Making Of ‘The Swinging Girl’”