The following image does not only impress my thoughts about choosing a particular style for the graphic novel I’m probably up to draw. It also shows the final result of the Hayabusa I implemented two days ago.

Let’s have a look first: 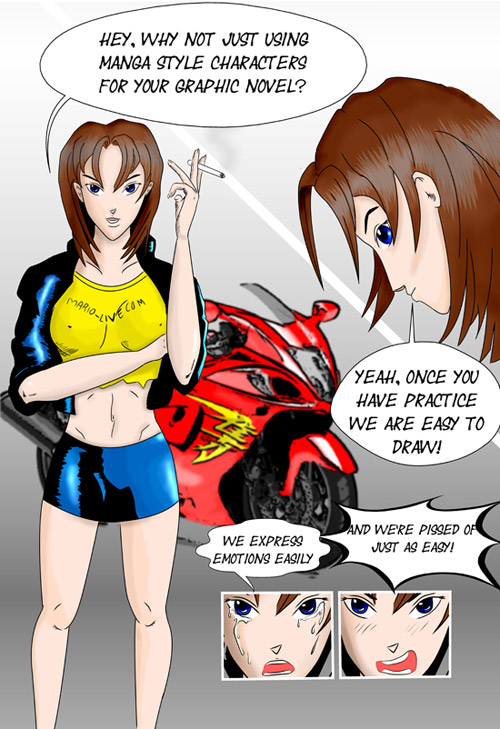 If you plan to write and draw a graphic novel you probably have the same problematic and confusing questions:

You see, what this does to you and me? It holds us back. It prevents us from just starting, but isn’t it important to consider?

The first thing I have to consider is which one of the two. My my first considerations have to do with the amount of work that is involved. Let’s find a winner for this:

The winner would be ‘Het Orderboek’, what of course would need a more catchy title once it is translated and adapted into an English graphic novel.

The second thing to consider is (I know this sounds a little outlandish): Would it be possible to make a movie of the book. Let’s find a winner for this.

Again the winner would be ‘Het Orderboek’.

Back to our questions:

Now we know that in this example a thriller would be the choice, it’s hard enough to make a decision for the style. With style I don’t mean a own style within a genre but a style to start with as a direction for the artwork.

I have to admit that I saw very many Manga drawings on the Internet and I even purchased a copy of one of the Death Note books. The reason for this was quite simple and it’s in fact prejudging the style. I always associated Manga with exaggerated big eyes, pointy chins and small noses.

Of course there are different styles within the Manga style. Maybe you read my article on the funny thing about Manga.

My first concern was if Manga wouldn’t just be too sweet and funny and make it impossible to use for a mature story. Besides this: doesn’t looks every Manga character the same in some way?
Though the Death Note story didn’t really touched me, it proved that my concerns are unnecessary. It’s definitively possible to tell an serious grown up story with Manga drawings.

This would be my first choice, though we have a lot of exaggerations here as well. Nonetheless, personally I feel that I’m more able to distinguish western Style Comic characters than Manga characters. How about you?

After thinking about if for a while I guess that at least the exaggeration part shouldn’t be a problem. Let’s face it: even if you call it a graphic novel it stays a comic book. Exaggeration makes emotions and behavior easier to draw. If we wanted to stay as close to reality as possible we also could make a photo novel.

By the way, I can’t really remember when I saw a movie where no exaggeration was involved.

But OK, it is still a kind of a dilemma and I think the only way to come over it is just to start with a few pages and have fun with the creative process. Please forgive me if you read this so far and I couldn’t come with real answers and a real solution for your problem when it comes to choosing the right style for your graphic novel project. Maybe it’s a good idea to browse through the Graphic Novel genres on TFAW.com to get the picture.

However, have fun with your artwork.