In my reply on Zuzanna’s comment on my last post I said that I wasn’t satisfied with the design. I mentioned that I would do a first draft of Jenny in Manga Studio, another character from my first book, before I redo Lynn.

Let’s take a look at the result first: 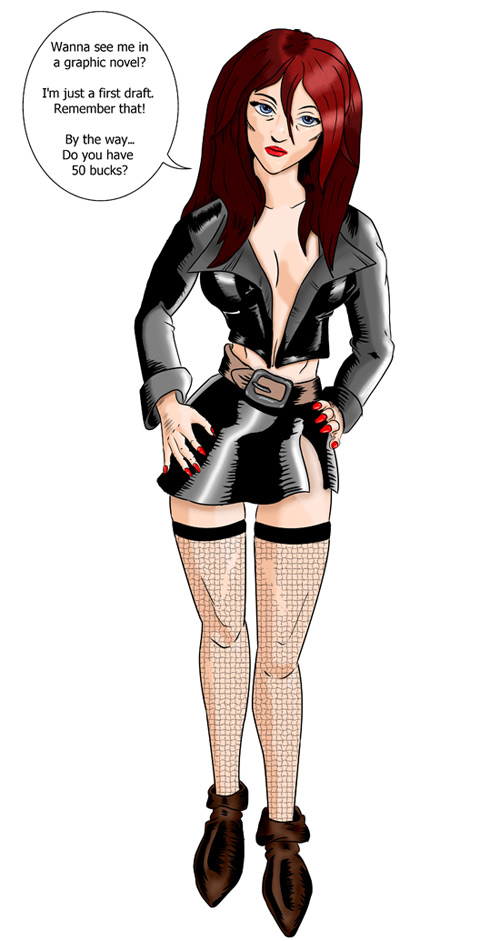 I hope you agree with me when I say that this one is more impressive than the first draft of Lynn. As in my other drawings I used the possibility to import that joint doll as a 3D object in Manga Studio. If you start using this feature for the first time it can be pretty overwhelming to see all this functions there. But after the third time of using it you will be quick and enjoy the fun of turning and bending your object.

So, who is Jenny? It’s a supporting character in my first novel ‘Het Orderboek’. She is a cocaine addicted street hooker in her 30th (I guess) and appears from time to time in different chapters. Though she has a key role there is not much of back story about her. More about her younger years is told in my second book ‘LOSER – Director’s Cut’. She is a supporting character in this book as well but her key role there is much bigger.

Anyway, if I would make a graphic novel of my first book this is how Jenny would look like as a first draft. It’s not already the final version as I don’t like her shoes and there is still enough to improve.

Please tell me what you are thinking in your comments below. I really look forward to read from you.

I’m very grateful for your visit and support. Have a nice day ahead.

One thought on “This Would Be Jenny Created In Manga Studio”