when I made this, this and this drawing. It’s more of an advice if you just starting out with your digital drawing adventure and you make your first finger stretching exercises.

And let’s face it How You Arrange… makes a catchier headline than How I arrange…, doesn’t it?

What can you expect from this short tutorial?

It’s not about a specific drawing but about the preparations of the layers portion of your workspace before you get started and draw the first line. Though you’ll find a few explanations on the process of my drawing in the end.

I assume that you already have chosen for a new page or even a new story with several pages. I also assume that you have a basic knowledge about layers (i.e. from Photoshop). At least you should know what layers are and what they are good for. If not please don’t hate me but let me know if you run into a snag via the contact page.

For the mentioned drawings I’ve setup my layers as followed: 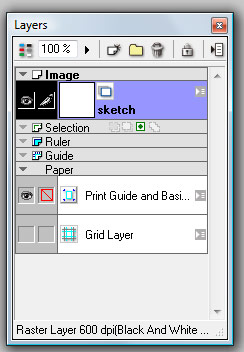 When you open a new document and you chose Layers from the Windows-menu (or press F4) in Manga Studio you will see that your document has 2 layers. In the image above you see that I have one layer (I deleted the second one) and renamed this one layer to sketch. This name reminds me on the fact that on this layer I will do my pencil work. I leave the properties of the layer unchanged and so should you. 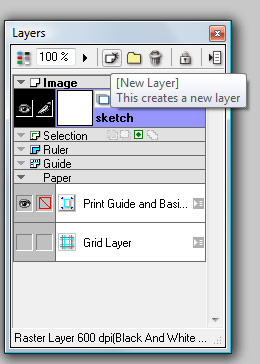 The second step is to click on the icon (image above) to create a new layer. 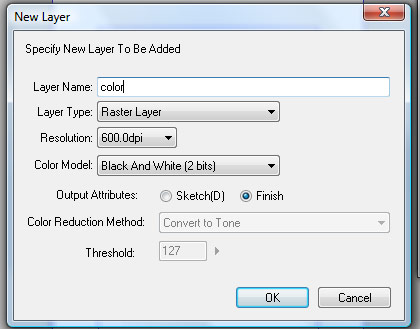 The box for the properties of the new layer will open as you see in the image above. I call the layer color. On this layer you will place all the color work in a later step of your drawing. 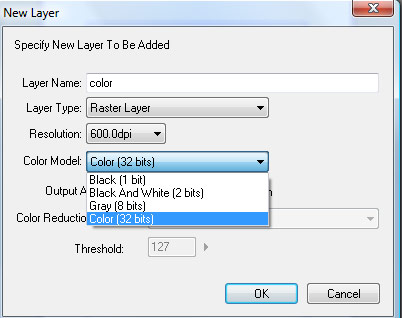 To be able to draw in color on this layer you need to change the color model. As you can see in the image above you chose Color (32 bits) from the dropdown menu. Finally you can hit the OK button. 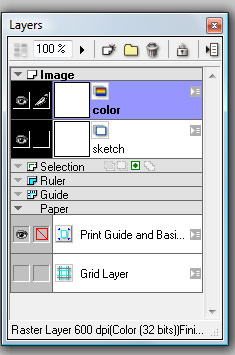 The result above shows you the color layer that is placed above the sketch layer. The color layer is easy recognizable with the color icon. If you don’t see this icon in your Manga Studio you probably hit the OK button before I said so.

I’m too fast whilst following tutorials as well sometimes. No hard feelings about that. Just delete the layer for now and repeat the previous steps so you have the same result.

Next we’re going to add another layer. Hit the New Layer icon and fill in the box with the layer properties of the new layer as followed: 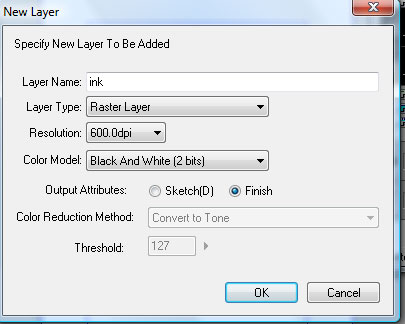 Because it is the layer where you will do your ink work, it’s kind of clever to name it ink. Don’t misunderstand me here, you can give the layer whatever name you are comfortable with.

The next step before you hit the OK button is to change the layer type. This is not a rule that should not be broken, but I change the layer type for my ink work into a vector layer. The reason is that resizing this layer will not have an effect on the clarity and smoothness of your line work. So I recommend doing this. 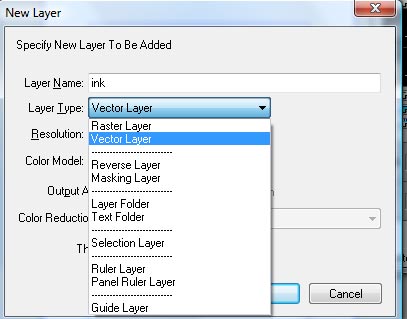 After you selected the described layer type (image above) you can hit the OK button and go ahead. Your result should be the same as in the image below. The Ink layer is above the color layer.

Just for the fact you are not very familiar with the layer order, I want to remember you that you easily can drag and drop the layers and change the order of them. The layers on top will cover the layers beneath. This way you make sure that your ink lines will always be on top of the colors and won’t be affected by them. Just switch the positions of this layers after you colored your image and you will see what I mean. 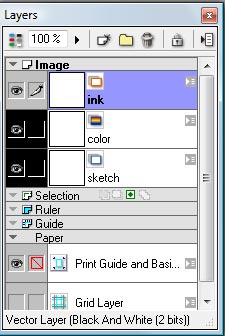 It’s possible that you ask yourself why I did not decide to make the layer called color a vector layer rather than leave the raster layer type. This is because tools like dodge and burn will not work on this layer. They are not compatible because they are pixel based and the vector layer is rendered.

The next step depends on what you chose to draw. If you like to have some help from the 3D Workspace feature of Manga Studio, you can import a 3D object by clicking in the menu on File –> Import –> 3D-File and then chose out of a ton of helpful objects. A head for example.

After the import you will see a layer map called 3D Workspace on top of the other layers. 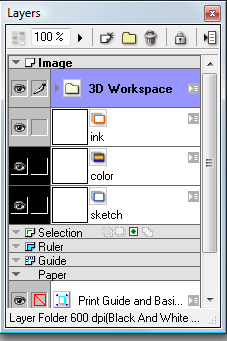 By dragging and dropping the layer map you will place it on the bottom of the layer hierarchy. 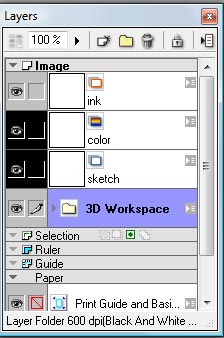 The next step I would do is clicking on the sketch layer to make it the active one. Then drawing with the pencil tool using the 3D Workspace as my guide.

Then I would click on the eye beside the 3D Workspace layer to make it invisible. (Clicking again would make it appear again. The eye works like an on/off switch).

After doing the sketch work I would chose the ink layer and after finishing that I would work on the color layer.

This last portion is probably enough stuff for another tutorial in the future.

7 thoughts on “How You Arrange Your Layers In Manga Studio”