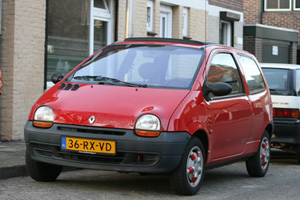 OK, let’s face it, sometimes we all behave like children that eat more pancakes than they can possibly store into their little bellies. The big difference is that pancakes are not as closely as expensive as our little adventures.

A week after I had written my post to say good bye to my Jaguar XJ40, I wanted to write this post. Just to take a measurement of my feelings about it a week later. Instead I decided to postpone it to do this inner measurement a little longer and also could measure the financial side of the medal a little better.

On the picture you can see my tiny, little fun car I drive ever since.  Believe it or not but I really enjoy every kilometer I drive in it. I don’t drive much as I have my office at home and just have to travel between my place and my girlfriends place. Even though the Jaguar was the most luxury car I ever owned it had some disadvantages I wasn’t really aware of, or better said, I ignored at some point.

After a week I didn’t missed my Jaguar anymore and was lucky that I had taken the step to let it go. I know I said it then, but I repeat anyway: the ability of letting go is very important in my opinion. It makes life much easier if you ask me. I experienced it a lot of times in my life and it always brought me back to focus on the little thinks in life, that are often overseen but can bring very much joy.

When I stood in the kitchen to make coffee I glanced outside the window at my Twingo and did the math. It didn’t took long to see that I wasn’t owning the Jaguar, but my Jaguar was owning me in some kind of way. You see, I’m not a celeb that can afford to changes fancy cars like you and me changing socks. I bought the car when I could afford it and even when I passed this time of being able to, I kept it because I was so used to it. Even though the luxury the car definitively had wasn’t getting my real attention anymore. I was used to it as well. It became one of this all day things. The funny thing is that I didn’t even drove that car every day. Most of the time it was locked up in my garage during the last months.

There are much more advantages than disadvantages after this little step of switching the cars. Honestly I didn’t find any disadvantage.

I drive every day with my Twingo and don’t take the bus anymore. For the money I save on the bus per month, I can nearly put gasoline in my car for three month. I save 78% on taxes with this car. I save at least 60% on car insurance. Not to forget that the Jaguar needed 2.5 times the amount of gasoline. Another advantage of not driving in a sougth after car is that I can park everywhere (even at night), without being afraid that someone rips of a leaper or makes scratches on it. The chance that somebody considers stealing the vehicle is much lower now.

You know, the crisis of credit is nagging on me too and I feel the difference after having taken this step right now in my wallet.

I’m curious if you have things that own you in stead of you owning them, or if you have things where you are better off by letting them go. It’s not always easy, we all know, but often you see the benefit of it faster than you think.

Have a nice day and come back soon!
Mario