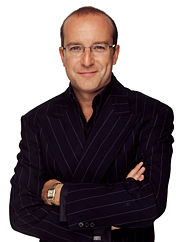 When I thanked Paul McKenna in the acknowledgment of my second book for writing his book Change your Live in 7 Days, one of the first questions I was asked by some friends, Dutch journalists and some readers was: What happened when you read this book?

The answer to this question is so simple that it rather sounds superficial but it is just as simple as that: it changed my life in just 7 days for the better. Most of the time I looked in curious faces after answering and then I had to tell the whole story from the beginning:

After several years of set backs since 2003 I ended up in a deep depression. (More about this you will see in my upcoming video post on this topic). I went to bed hoping not to wake up the next day. It was as if these Dementor guys from J.K. Rowling had sucked all the happiness out of my life. Now I mention this, I also have to thank her for her amazing books.

Finally, somewhere in the middle of 2006 I was persuaded by a good friend of mine to see a doctor. To find a cure and a way out of my miserable state.
Because I couldn’t sleep I agreed to take pills. Side effect: after a couple of month there was no chance for me getting some sleep without these pills. No wonder that at some point I was wondering if I had become addicted to it. In addition, I had got a prescription from my doctor for anti-depressives and pills against panic attacks, that came up with that bad feeling in my chest. Maybe you understand that I was nearly suicidal. There was definitely no light on the end of the tunnel (I don’t know if you say something like this in English, but I use this metaphor anyway).

Seemingly the light I was still hoping for, was on its way. It was in the end of December 2006 when my girlfriend invited me for a mini-cruise to Newcastle. She knew that I love the UK and enjoy every visit, so she thought that would bring a little bit more happiness back into my life. Sweet, isn’t it? Together we enjoyed every second of our journey. The entertainment on the ‘King of Scandinavia’ was brilliant. There was a singing host who also did the bingo, a band that played with enthusiasm and last but not least the ballet. Even though I enjoyed all this, I was sure that the dark ghosts of my daily life were hanging over me like the sword of this Damocles guy.

When we arrived the second day we had the whole day to hang out in Newcastle. As a writer myself, I read a lot. Not just fiction. No, I got inspired by stories that where told by real life. I like to read biographies of people I admire. One of the books I had on my to-read-list was Gordon Ramsay’s autobiography Humble Pie. I just heard in a Dutch talk show that it was published and I was eager to read the original rather than the translated version. Since I started learning English I (nearly) refuse(d) to read translated books. There are more reasons for that, but this is another topic. When I walked with my girlfriend through the streets of Newcastle, we were attracted by a big bookstore. Forgive me that I don’t remember the name anymore. When I walked through the aisles of the store, a whole wall of books written by Paul McKenna absorbed my attention. I never heard of him, but I became curious. What had this guy to tell? I took some of his books and read the text on the back flap. I saw titles like I can make you thin, Quit smoking today and Change your life in 7 days. ‘Sure you can’, I thought smirking skeptical, not taking it serious. I asked my girlfriend if she ever had heard of a guy named Paul McKenna. She didn’t knew him either. I was wondering if the other people in the store knew him, but because of my depression I wasn’t motivated and open minded enough to ask a stranger for information about a writer who claimed that he could make people thin, confident and lucky with his books, that were all accompanied by a free mind programming CD. I knew for sure: nothing in the whole world could have made me lucky again. I was convinced about that. I’ve put the book back on the shelf and left the store even without buying the biography of Gordon Ramsay. For some reason I just didn’t want to think about something like that. Maybe it was a kind of fear for a disappointment. 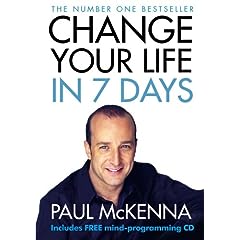 My girlfriend Simone and I went to a coffee shop (no, not the Dutch version. In the UK they are neat!) and some other stores. When we had half an hour left to get to the bus that was supposed to take us back to the ship, the feeling came over me that I would miss an important chance if I did not give it a try and read this Change-your-life-book from this McKenna guy. ‘Why not? I can’t say it doesn’t work for me without trying it. The only risk I would take was the price of a book. Though no big deal, ’ I thought. I took Simone by her hand and we headed through the crowd of shopping people, back to the bookstore. It was a little miracle to me that I remembered the entire way back, as it was a foreign place and I’ve never been there before. I first put a copy of Gordon Ramsay’s fucking biography (<-had to say that, as Gordon’s loves the f-word) in my shopping basket and than Change your life in 7 days. After the short visit to Newcastle we brought a visit to Simone’s parents in the north of the Netherlands, where I first read the autobiography by Gordon Ramsay. I had some brief looks inside Change your life in 7 days and decided to read it and work with it, when I was back at home. So the only thing I read so far was the introduction. This excerpt alone was already very intriguing to me. When we arrived at home later, I immediately read the first chapter and tried to relax by listening to the mind programming CD.

At first I was so skeptical if it would make any difference to me. I thought that I was totaly crazy, lying there and listening to a CD that was deliverd with a book that claimed to change my life for the better. The result of this first day was that I didn’t need a sleeping pill at night. For the first time in about six month I could fall asleep without any chemistry. It was amazing. I know this sounds ridiculous for those people who never suffered from sleeplessness, but it worked for me. What had I missed it, just to fall asleep peacefully. One of my first thoughts the following day was that if this was the only thing I gained by purchasing this book, it was worth every cent I payed for it. With a better mood I began on day two of the adventure and I was amazed by the fact, that I looked forward to the next day. In years I didn’t look forward to the next day. I didn’t wanted to have a next day, remember? This time I looked forward to the next day as it was a new chance to make things happen. In the following day’s not just my girlfriend and friends observed a more positive change in my mood and my behavior. In combination of the chapters for every day and the mind programming CD, I felt that good, that even my doctor was enthusiast with my improvement. He advised me to keep listening to Paul McKenna’s CD and a few weeks later he lowered the medication. Sleeping pills weren’t necessary anymore. It

didn’t took long and my doctor orderded Paul McKenna’s I can make you thin system for personal use. By re-reading the book and listening again and again to the CD I get involved in life again. I seriously picked up my work as a writer again. When I was caught in my depression I thought about to stop. Stop writing. Stop everything. Even breathing. It’s unbelievable when I look back now! As I mentioned in the begining I finished my second book in the meantime and published it in the Netherlands. Not just that, I even helped two other writers by self publishing their books in 2007. In November of that year I wrote during the National Novel Writing Month the first draft of my third book and made friends in the UK and in the US. I know what some of you thinking right now: friends met via the Internet are no real friend. My advise: forget about that. I’m the positive person again I was before I struggled with the depression. Do I have to thank Paul McKenna for the books he wrote? You bet I have. Many people worldwide have, I guess. The achievements are my personal success, but without this helping hand I would be more notorious now than I was two years ago. Change your life in 7 days helped me to find out what I truly want in life and helped me to discover the many ways to achieve it. Don’t misunderstand me, I’m still on my way. But for me, the way is a goal also. Besides this: life is a interesting voyage. I wouldn’t overestimate by saying that Paul McKenna saved my life. If not physical, than at least mentally and psychological, what is by the way the core of everything. Without this you would be a zombie. I was hard on the way to give up everything. One day I want to thank him in person. I’m sure this day will come. In the meantime I read all the books by Paul McKenna. One important final note: Paul McKenna always gives the advice to see professional therapists and doctors when you suffering from a clinical depression, epilepsi or any other desease. Everything I described was and is my personal experience. The whole text you just read is my own responsibility. For those who are interested I will come back to this in more detail (as if there wasn’t enough yet) in my upcoming video post (Part #2).

Thank’s for reading this and have a wonderful life,